What Are Some Solutions for the Political and Religious Disputes over Jerusalem? 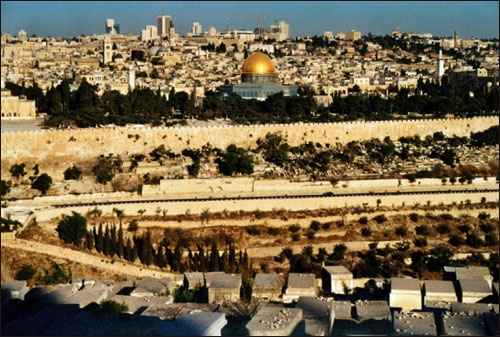 Overlooking the “Old City” of Jerusalem from the Mount of Olives

Michael C. Hudson, PhD, Professor of Government and International Relations at Georgetown University, in a 2000 essay titled “The Transformation of Jerusalem 1917-2000 AD,” published in Jerusalem in History, wrote:

“Clearly there are no simple answers to the Jerusalem problem. Yet the dangers to the city are too serious to permit it to fester unattended. The many friends of Jerusalem in the world would be doing a service if they would promote active and creative discussion about the city’s future. These include those who can speak for the three religions for whom the city is so holy as well as those who can influence the policies of the states and political communities directly involved: Israel, the Palestinians, Jordan and the other Arab states. In the search for an overall settlement ideas such as shared or dual sovereignty, cantonization, or even repartition without walls might, if properly developed, help solve not only the Jerusalem problem but the entire conflict.”

The Jewish Peace Lobby, an American Jewish organization which seeks to promote a just and lasting resolution to the Israeli-Palestinian conflict, in a 2001 article posted on its website titled “JPL & The Violence,” wrote:

“In December 2000, The Jewish Peace Lobby helped organize and publicize a rabbinic statement on the current violence in Israel and the Occupied Territories: A Rabbinic Response to Events in the Middle East…

This statement came at a time when others were pulling back from the Jerusalem issues. Prime Minister Barak, at the time, had proposed an interim agreement that would put off negotiations on the Temple Mount (as well as other Jerusalem related issues).

The rabbis took the position that ‘Judaism does not demand exclusive Jewish sovereignty over this site.’ Indeed, the rabbis went further, citing a passage from Isaiah affirming the Temple Mount as the ‘house of prayer for all nations,’ they see the Islamic holy places on the Mount as partial fulfillment of Isaiah’s vision. They sought to allay Muslim fears by reiterating the long-standing rabbinic view that Jews are not permitted to visit the Mount in pre-messianic times. The rabbis did not propose a specific solution to the Temple Mount issue; they sought to demonstrate that WITHIN JEWISH TRADITION THERE IS A NON-EXCLUSIVIST PERSPECTIVE WHICH WOULD ALLOW FOR CREATIVE SOLUTIONS.”

Thomas A. Idinopulos, Phd, Director of Jewish Studies at Miami University of Ohio and Marshall J. Breger, Phd, Professor of Law at Columbus School of Law, in an excerpt from their 1998 book titled Jerusalem’s Holy Places and the Peace Process, posted on the Washington Institute for Near East Policy website, stated:

“More than sixty proposals for the solution of the Jerusalem problem have been made since the Sykes-Picot Agreement of 1916, each of which recommends guarantees for the security of the holy places. Generally, these proposals can be divided into two groups: those that propose that Jerusalem should remain undivided under Israeli sovereignty, and those that propose that the city should be physically or politically separated under dual or shared Israeli and Palestinian control.

Public opinion polls show that the Israeli people overwhelmingly favor the first kind of solution, often with some provision for the political representation of Arab Jerusalemites and the ‘Vaticanization’ of the Muslim sites. The PA’s current position falls into the second category: that Jerusalem be physically undivided but politically separated with dual or shared sovereignty. Yet the Old City, with its close neighborhoods and shrines, poses problems under this solution that are usually met by subproposals giving Jews control over the Jewish Quarter, Muslims control of the Muslim Quarter, and allowing Christians to decide between Jewish and Muslim sovereignty. These subproposals in turn face heavy criticism for their political utopianism.

Administrative solutions, which deal solely with the holy places and not questions of Jerusalem’s sovereignty or political determination, are of three sorts. The first would create an interfaith committee of Muslim, Christian, and Jewish representatives to administer the holy sites; this solution is akin to League of Nations and UN proposals first for a special commission and later for a corpus separatum. The second solution would devolve control over a religion’s holy sites, in a sort of ‘functional internationalization,’ to committees comprising members of that faith. This is easier said than done, however. The third approach would leave the matter to various international guarantees such as the UN Educational, Scientific, and Cultural Organization (UNESCO) and Hague Conventions. As Israel already subscribes to many of these guarantees, reaffirming its commitment to the protection of the holy places and their respective religious communities’ rights would be both a simple and unilateral matter.”

The Anti-Defamation League (ADL) wrote in a 1997 entry titled “Jerusalem -- Proposals,” published on its website:

“There have long been attempts to propose a resolution of the issue of Jerusalem, leading former Deputy Mayor of Jerusalem Meron Benvenisiti to declare a ‘peace plan industry.’ Benvenisiti has commented that ‘the reason the problem of Jerusalem has not been resolved is not because of the lack of theoretical solutions, but because Jerusalem is more than the sum total of the components that can be dissected in a rational manner.’ Others see Jerusalem as an unresolvable issue, making any final status agreement unlikely.

There are a number of currently popular proposals regarding a Jerusalem settlement:

In recent months, there have been repeated calls for the ‘sharing’ of Jerusalem by church and peace groups. While the exact modalities of such a ‘sharing’ are not spelled out, this proposal calls for a recognition of both Israeli and Palestinian claims on the city. Opponents of this position argue that ‘sharing’ is tantamount to dividing. As former Jerusalem Mayor Teddy Kollek points out, shared sovereignty ends up meaning ‘two competing authorities and ultimately two sets of laws, two rates of customs and taxation, two police forces… These are an invitation to a boundary and a boundary is an invitation to a wall.’

More blatant is the call for divided sovereignty, in which Palestinians would be given East Jerusalem, including the Old City, with Israel retaining West Jerusalem. Issues such as post-1967 Israeli neighborhoods in the eastern part of the city and religious access to holy places will be arranged. While this position is consistent with Palestinian public opinion it is contrary to the Israeli consensus.

In the Allon Plus Plan, Prime Minister Netanyahu calls for an expansion of Israeli sovereignty over Jerusalem to include the satellite communities built since 1967. In return for Palestinian concessions on Jerusalem, Palestinian sovereignty would be established in Gaza and ‘enclaves’ in the West Bank.

The Borough System or ‘Functional Sovereignty’:

This proposal was first initiated by Teddy Kollek through his nearly three decades as Mayor of Jerusalem. According to this proposal, greater powers would be given to local neighborhood councils. Thus, primarily Palestinian neighborhoods would administer their local matters as would ultra-orthodox Jewish neighborhoods.

Israelis supportive of this proposal claim it will grant Palestinians greater power, while ensuring Jerusalem remains under Israel sovereignty. Some Palestinian supporters see it as an opportunity to strengthen their presence and institutions in Jerusalem, or even as a consistent strategy of ‘creeping sovereignty.’

Both the reported Beilin-Abu Mazen Plan and the Beilin-Eitan Plan call for Israel to retain sovereignty over the current municipality of Jerusalem. The Palestinian Authority would instead establish the capital of an independent Palestinian state in Abu Dis, a suburb of Jerusalem. This suburb would be renamed Al-Quds, and would be the site of the Palestinian parliament. Palestinian-majority neighborhoods in the eastern part of the city would be granted wide-ranging autonomous powers. According to reports, in the Beilin-Abu Mazen Plan, the Temple Mount will be considered extraterritorial, under Palestinian management.

Jerusalem, the capital of Israel, within its existing municipal borders, will be a single unified city within sovereign Israel. The Palestinians will recognize Jerusalem as the capital of Israel and Israel will recognize the governing center of the Palestinian entity which will be within the borders of the entity and outside the existing municipal borders of Jerusalem. Muslim and Christian holy places in Jerusalem will be granted special status. Within the framework of the municipal government the Palestinian residents of Arab neighborhoods in Jerusalem will receive a status that will allow them to share in the responsibility of the administration of their lives in the city.

Other similar proposals call for a Palestinian autonomy in Arab neighborhoods which were not part of pre-1967 municipal Jerusalem, but which were annexed by Israel in 1980.

While there is growing Israeli support for this type of arrangement, it is unclear if Palestinians would agree to an arrangement in which their capital is not in municipal Jerusalem, and without the Temple Mount.”

APA (7th ed.):
ProCon.org. (2008, May 22). What Are Some Solutions for the Political and Religious Disputes over Jerusalem? ProCon.org. https://israelipalestinian.procon.org/questions/what-are-some-solutions-for-the-political-and-religious-disputes-over-jerusalem

Turabian (9th ed.):
ProCon.org. "What Are Some Solutions for the Political and Religious Disputes over Jerusalem?" ProCon.org. Last modified on May 22, 2008. Accessed January 24, 2023. https://israelipalestinian.procon.org/questions/what-are-some-solutions-for-the-political-and-religious-disputes-over-jerusalem/