What and Where Is the West Bank? 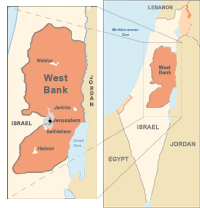 “Territory, formerly part of Palestine, after 1949 administered by Jordan, since 1967 occupied by Israel (1995 est. pop. 1,320,000), 2,165 sq mi (5,607 sq km), west of the Jordan River, incorporating the northwest quadrant of the Dead Sea. Since mid-1994 limited Palestinian self-rule has existed in portions of the West Bank. Israelis who regard the area as properly Jewish territory often refer to it by the biblical names of Judaea and Samaria. The largest and most historically important cities are Hebron, Nablus, Jericho, and Bethlehem. East Jerusalem is regarded as part of the West Bank by Arabs; however, Israel has incorporated it into the larger Jerusalem economy and municipality.”

The West Bank is situated west of the Jordan River and the Dead Sea, and east of Israel. Its area is 5,860 km². The climate of the West Bank varies a lot, with most of the rainfall in the north and the west. In the north, crops and vegetables are grown olives in the hills, and grapes in the southern region. The east has a number of oases and farms receiving its water from springs. In many regions in the south and the east, desert penetrates the arable land.

The population on the West Bank is 2,1 million, of which 87% are Palestinian Sunni Muslims, 8% are Palestinian Christians, and 5% Jewish Israeli settlers. Christians are concentrated to Bethlehem, Bayt Sahour, Ramallah, and Jerusalem (Al Quds). The parts of the West Bank that are administered by Israel, is subject to illegal colonization by Jewish settlers, living in small Jewish-only communities, subsidixed by the state of Israel and Jewish organizations. They have been here only since the early 1980’s. The land used has often been confiscated from the Palestinian owers, and does often occupy the best agricultural land, as well as claiming an unproportionately large part of the water resources. Many of these Jews claim that this land has been given to them by God, so they are here for politico/religious reasons. Many others live here simply because of the good housing conditions and low rent.

Cities on the West Bank with a population of more than 100,000 include East Jerusalem, Ramallah, Hebron, Nablus and Bethlehem. The West Bank has 2 universities, Bir Zeit in Bethlehem and an-Najah in Hebron.

1949: The borders between Israel and Jordan are settled, and from this the West Bank is defined. The border line is called the Green Line. There is a high influx of Palestinian refugees from the area which came to be known as the state of Israel.

1952: Jordan annexes the West Bank, but does only get support from a couple of countries for this claim. All inhabitants of West Bank receive full Jordanian citizenship.

1967 June 8: Israel occupies the West Bank as a result of fighting during the Six-Day War.

1994: The foundations for what is intended to become a fully independent Palestinian are laid down. This happens with an agreement with Israel, and follow the plans as defined in the Oslo Agreement.

1997 March: The connection between the West Bank and East Jerusalem is cut off, as Israel starts to build a Jewish-only settlement in the outskirts of Jerusalem, in Jabal Abu Gnein (Hebrew: Har Homa).

2002: Israel starts to reoccupy the parts of Palestine that have been under the Palestinian Authority in order to take control over terrorist organizations working out of the region.”

APA (7th ed.):
ProCon.org. (2008, May 23). What and Where Is the West Bank? ProCon.org. https://israelipalestinian.procon.org/questions/what-and-where-is-the-west-bank

Turabian (9th ed.):
ProCon.org. "What and Where Is the West Bank?" ProCon.org. Last modified on May 23, 2008. Accessed January 21, 2022. https://israelipalestinian.procon.org/questions/what-and-where-is-the-west-bank/