How Are the Palestinian Territories Governed?

“The Palestine Liberation Organisation (PLO) emerged as its [the Palestinian national movement’s] leading umbrella group shortly before the Six-Day War of 1967, during which Israel captured the West Bank, Gaza and East Jerusalem, and conducted a protracted campaign of violence against Israel.

The PLO under Yasser Arafat gradually won international recognition as the representative of the Palestinian people, culminating in the Oslo Accords with Israel in 1993.

These accords established a Palestinian National Authority (PNA – also referred to as the Palestinian Authority, or PA) as an interim body to run parts of Gaza and the West Bank (but not East Jerusalem) pending an agreed solution to the conflict.

The PNA functions as an agency of the PLO, which represents Palestinians at international bodies. It is led by a directly-elected president, who appoints a prime minister and government which must have the support of the elected Legislative Council.

Its civilian and security writ runs in urban areas (Area A) under the Oslo Accords, with civilian but not security control over rural areas (Area B)…

Uneasy co-existence between PNA President Mahmoud Abbas and a Hamas-led government led to violence between armed wings of Fatah and Hamas, culminating in Hamas seizing power in Gaza in June 2007 and President Abbas dismissing the government.

The two PNA areas have since been run by the separate factions – the West Bank by Fatah, and Gaza by Hamas. Egyptian-mediated efforts to bring the two factions together met with little success…

In 2014 Fatah and Hamas announced a reconciliation deal and formed a unity government, in an attempt to end seven years of sometimes violent division.” 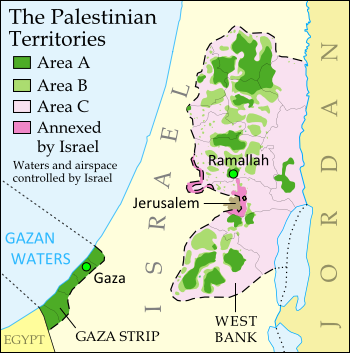 “Prior to the 1993 Oslo Accords, in which the Palestinian Liberation Organization (PLO) and Israel officially began negotiating under a two-state for two peoples paradigm, the West Bank and Gaza Strip were under full Israeli Civil Administration control. The office was tasked with the handling of bureaucratic responsibilities of the occupied territories while the Israeli military was responsible for security.

With the onset of the Oslo process, however, limited autonomy and self-rule was given to the Palestinians in the West Bank (though not in Gaza). The West Bank was divided into the following three administrative divisions, with civil administrative control of some areas transferred to the newly created Palestinian Authority (PA) while Israel maintained civil control over the majority of the territory. Under the terms of the Oslo process, full Palestinian governance was to have been achieved by 1999. But 15 years later, any Israeli transference of sovereignty remains elusive…

Area A
Comprising 18 percent of the West Bank, Area A is under PA civil control and security authority. Although it is comprised entirely of Palestinian cities – including Hebron, Nablus, Ramallah, Bethlehem and some towns and villages that do not border Israeli settlements – they are separated by areas controlled by Israel, including checkpoints, settlements and military outposts.

An exception is found in Hebron, the largest Palestinian city in the West Bank. While it lies in Area A, less than 1,000 Israeli settlers are living among hundreds of thousands of Palestinian residents, a state of affairs which prompted Israel to divide the city into two zones in the 1990s: H1, 80 percent of the entire city which is administered by the PA; and H2, 20 percent of the city which is controlled by Israel.

Palestinians from Area A cannot travel to other areas within the West Bank — even other parts of Area A — without crossing Israeli checkpoints. Despite Palestinian civil and security governance, Israel still maintains a de facto veto of final authority, sometimes raiding homes and businesses or detaining and arresting Palestinians.

Area B
Comprising about 22 percent of the West Bank, Area B is under Palestinian civil administration while Israel retains exclusive security control with limited cooperation from the Palestinian police. Area B includes more than 400 villages and farmland…

Area C
Under full Israeli civil administration and security control, Area C is the largest division in the West Bank, comprising 60 percent of the territory. The PA only has responsibility for providing education and medical services to the 150,000 Palestinians living there. With the exception of Hebron, all Israeli settlements are in Area C, where Israel has full authority over building permissions and zoning laws. Area C contains most of the West Bank’s natural resources and open areas… Israel’s Civil Administration has planned for Palestinian development in less than 1 percent of Area C, and 99 percent of the area is off limits or heavily restricted for Palestinian construction.

East Jerusalem
Like the West Bank, East Jerusalem has been occupied by Israel since 1967… But Israel’s method of control over the territory differs. In 1980, Israel unilaterally declared Jerusalem a unified city, effectively consolidating power over Palestinian East Jerusalem, which would be the future capital of an independent Palestine as envisioned under the two-state Oslo process.

Unlike Palestinian residents of West Jerusalem and the rest of Israel, Palestinians living in East Jerusalem are given a unique identification card, which – unlike their Palestinian neighbors in the West Bank – allows them to travel throughout Israel and the West Bank. However, they are not granted an Israeli passport nor can they vote in Israeli elections.

The European Forum for Democracy and Solidarity, in a Jan. 31, 2014 article for its website titled “Palestinian Territories,” wrote:

“On a national level, the Palestinians elect a head of state – the president – and a legislature – the Palestine Legislative Council (PLC), a unicameral parliament consisting of 132 members. After the election law of 2005 came into force, the Palestinian Authority has a mixed electoral system combining both a majority system (districts) and a system of proportional representation (lists). The law divides the 132 seats of the PLC equally between the majority system (66 seats) and the system of proportional representation (66 seats). The PLC is elected for a four-year term.

Based on the majority system, the Palestinian Territories are divided into 16 electoral districts (11 in the West Bank and 5 in the Gaza Strip). Each district is allocated a number of seats in the parliament according to the number of its population. Six out of the 66 seats allocated to the majority system are reserved for Christians, because it is considered the minimum quota for their representation in the council.

It is important to distinguish between the Palestine Liberation Organisation (PLO) on the one hand and the Palestinian National Authority (PNA) on the other. The PLO was founded in 1964 aiming at liberating the Palestinian state with its 1947 borders. Until today it is the sole representative of the Palestinian Diaspora in international institutions as the United Nations (UN) and the Arab League. The PNA on the other hand was a direct result of the 1993 Oslo Accords, founded as a 5-year transitional body during which final status negotiations between Israel and the Palestine’s were to take place.” 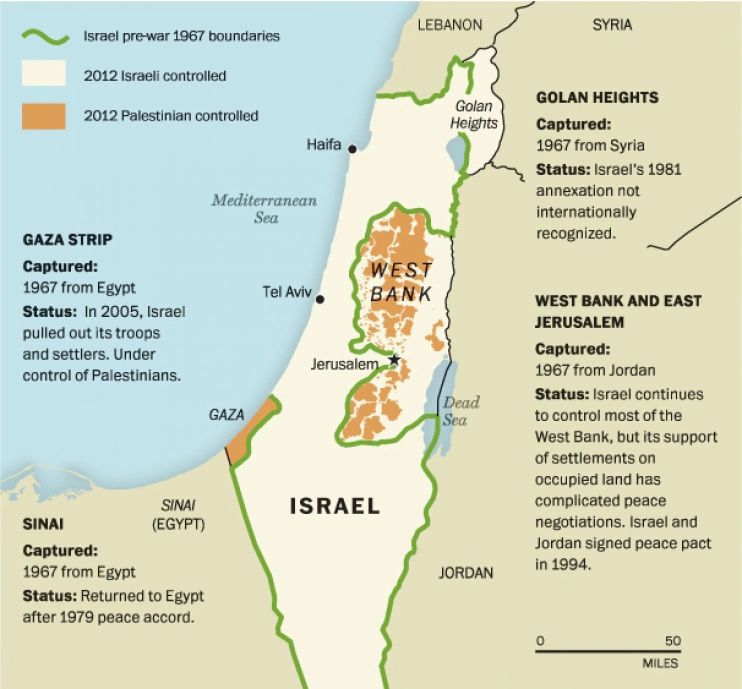 Source: Max Fisher, “9 Questions About Israel-Gaza You Were Too Embarrassed to Ask,” Washington Post, Nov. 21, 2012

The Mission of Palestine in Denmark, in the “Palestinian Government” section of its website, Palestine.dk (accessed Oct. 6, 2015), wrote:

“The Palestinian National Authority (PNA) was established in 1994 as an outcome of the Oslo peace process as the elected government. The PNA was established as a five year interim body to see over Palestinian affairs in the Occupied Territories. The PNA was created by and has historically been associated with, the Palestine Liberation Organization (PLO), with whom Israel negotiated the Oslo Accords. However the PNA should not be confused with the PLO who continues to enjoy international recognition as the sole legitimate representative of the Palestinian people, representing them at the United Nations and abroad. The PLO was established in 1964…

According to the Palestinian Basic Law which was signed by Yasser Arafat in 2002, the current structure of the PNA is based on three separate branches of power: executive, legislative, and judiciary.

The Negotiations Affairs Department (NAD) was established in 1994 in Gaza in order to follow up on the implementation of the Interim Agreement signed between Israel and the PLO. The NAD has two offices; one in Gaza… [and one] in Ramallah…

The [Palestinian Legislative Council] is an elected body of 132 representatives, and must approve all government cabinet positions proposed by the Prime Minister. The Judiciary Branch has yet to be properly formalized. The President of the PNA is directly elected by the people, and the holder of this position is also considered to be the commander-in chief of the armed forces. The Prime Minister is chief of the security services in the Palestinian territories. The Prime Minister chooses a cabinet of ministers and runs the government, reporting directly to the President.”

The Permanent Observer Mission of the State of Palestine to the United Nations in New York, in the “Palestine Liberation Organization” section of its website (accessed Oct. 6, 2015), wrote:

“The Palestine Liberation Organization (PLO) was established in 1964 and has been the embodiment of the Palestinian national movement… The Arab Summit in 1974 recognized the PLO as the ‘sole and legitimate representative of the Palestinian people’ and since then the PLO has represented Palestine at the United Nations, the Movement of Non-Aligned Countries (NAM), the Organization of the Islamic Conference (OIC), and in many other fora…

Structure of the Palestine Liberation Organization

Palestine National Council
The PNC, which is the highest decision-making body of the PLO, is considered to be the parliament of all Palestinians inside and outside of the Occupied Palestinian Territory, including Jerusalem. The PNC normally sets PLO policies, elects the Executive Committee and makes the necessary changes in its own membership, as well as changes to the Palestine National Charter (a special meeting is required) and to the Fundamental Law of the organization. The PNC also elects a speaker, two deputies and a secretary, who make up the Bureau of the Council. The Council has its own standing committees for various aspects of its work, such as its legal and political committees. The composition of the PNC represents all sectors of the Palestinian community worldwide…

Central Council
The Central Council, which was established by the PNC in 1973, is the second leading body of the PLO. The Council functions as an intermediary body between the PNC and the Executive Committee. At present, the membership stands at 124, including 15 representatives of the PLC.

Palestine Liberation Army
The Palestine Liberation Army (PLA) was established as the official military branch of the PLO in 1964, in accordance with the resolutions of the 1st Palestinian Conference (the 1st PNC). At that time, three brigades were established: Ein Jalut in Gaza and Egypt, Kadissiyah in Iraq, and Hiteen in Syria… Over time, however, changes were made to the PLA’s structure, including, for instance, the establishment in 1968 of commando units in Gaza to fight against the Israeli occupation… With the establishment of the Palestine National Authority (PNA) in the mid 1990’s, important parts of those brigades were absorbed into the PNA security forces.