“On a hot day of August 636, the two opposing armies faced each other on the banks of the Yarmuk, a Jordan tributary. The Arabians, 25,000 strong, were commanded by Khalid; the Byzantine army, twice as numerous and composed mosly Armenian and other mercenaries, was led by a brother of Empereor Heraclius. The day was an excessively hot one clouded by wind-blown dust and presumably purposely chosen for the encounter by the Arabian generalship. The Byzantine fighters were cleverly maneuvered into a position where the dust storm struck them in the face. Only a few managed to escape with their lives. The fate of Syria, on the fairest of the Eastern Roman provinces, was decided. ‘Farewell, O Syria,’ were Heraclius’ parting words, ‘and what an excellent country this is for the enemy!'”

“By the end of the reign of the second caliph, ‘Umar ibn al-Khattab (634-44), the whole of Arabia, part of the Sasanian Empire, and the Syrian [including Palestine] and Egyptian provinces of the Byzantine Empire had been conquered; the rest of the Sasanian lands were occupied soon afterwards.”

“After completing the occupation of Syria and Palestine the Arabs turned to organizing the administration of the newly occupied territories. As they were exclusively fighters and did not have any administrators capable of fitting themselves into the well-developed bureaucracy that the Byzantines had left behind them, they decided to leave the existing system of administration to carry on its work as in the past, with the same local functionaries…

Most of Palestine, up to the border of the valley of Jezreel and Beth-shean, belonged to one district known as ‘Jund [Military District] Filastine’ which was, in fact, the Palaestina Prima of the Byzantine era together with part of Palaestina Tertia [see 330 A.D.]. Galilee, the southern part of Lebanon and parts of the Golan fell within Jund Urdunn, which constituted the Palaestina Secunda of the Byzantines.”

“The people of Madina saw power being drawn northwards towards the richer and more populous lands of Syria and Iraq, where governors tried to make their power more independent. Such tensions came to the surface in the reign of the third caliph, ‘Uthman ibn ‘Affan (644-56)…A movement of unrest in Madina, supported by soldiers from Egypt, led to ‘Uthman’s murder in 656. This opened the first period of civil war in the community. The claimant to the succession, ‘Ali ibn Abi Talib (656-661) was…a cousin of Muhammad and married to his daughter Fatima. ‘Ali’s alliance grew weaker, and finally he was assassinated in his own city of Kufa. Mu’awiya [the first Umayyad] proclaimed himself caliph and ‘Ali’s elder son, Hasan, acquiesced in it.” 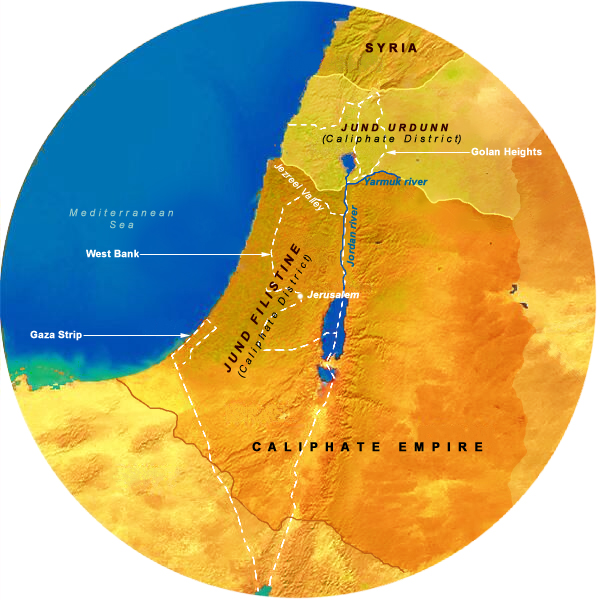 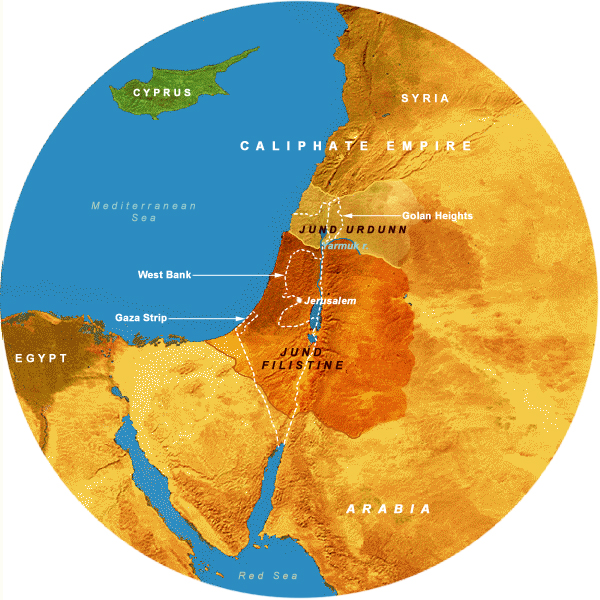 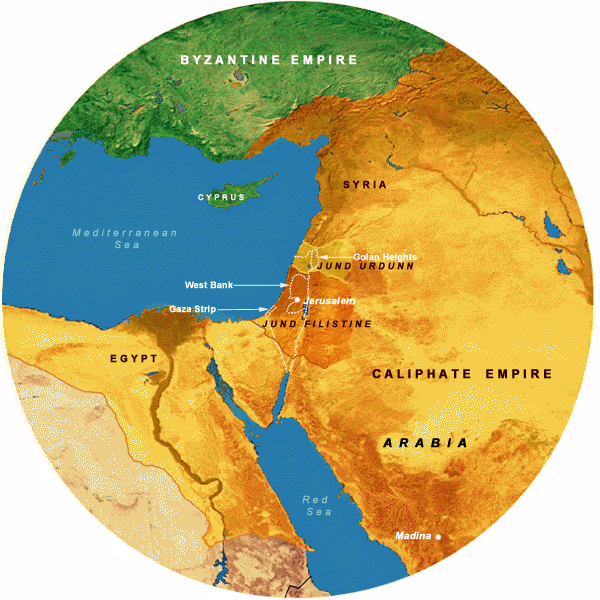