In The Name Of The Most Merciful Allah
The List for “Change and Reform” believes that participation in the Legislative elections falls within the comprehensive program for the liberation of Palestine and the return of the Palestine People to its independent state with its capital Jerusalem.

The Change and Reform list seeks the construction of a developed Palestinian Civil society based on multiplicity; the Palestinian political order should be such as to help achieve the Palestinian National Rights.

The Change and reform List adopts a number of approaches to fulfill fixed aims emanating from Islamic references – namely:

to resist Occupation and achieve Liberation.

The C&R will also build a normal Palestinian individual who takes pride in his religion, land, freedom and dignity and is ready to sacrifice for them.

The C&R will continue to resist the erection of the Racist Wall and it will seek its destruction.

The rights of minorities are to be protected on the basis of good citizenship; public funds are for all; the prisoners and wounded are the embodiment of sacrifice and should be accorded full care.

Palestinian WAQF is also to be safeguarded, be it Muslim or Christian.

The relationship between the PLO and the PA should be mended so as to serve the Nation and respect fields of specialty.

On the inter-Arab and Islamic relations the C&R calls for consolidating them; activating the role of Arab & Islamic masses in supporting our anti-occupation stand.

The C&R will build balanced political relation with the international community to ensure playing an effective role.

The C&R will stress on international level, the illegibility of occupation which is to be doomed as the most grisly form of terrorism.

The C&R will reject grants with strings, at the same time it will rehabilitate cities and villages and restore infrastructure. 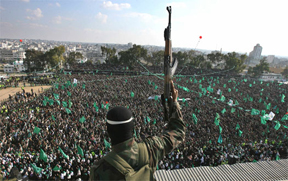 Chief among its objectives internally, the C&R will combat corruption with its aspects, administrative or financial. The C&R will apply the policy “where from did you get this”; to achieve this goal control systems will be set up to monitor the activities of civil servants and others.

The Islamic Law will be the source of Palestinian Legislation, the three branches, legislative, executive and judicial are to be separated.

Constitutional tribunal is to be activated.

A number of measures, based on Islam are to be implemented. A new elections law is to be passed so as to ensure justice and fair representation of our people. All citizens are equal before the Law; arbitrary arrest is taboo. Dialogue should be encouraged and the respect of the other; point of view guaranteed for all; unions are to be independent and domination is unacceptable; political powers are recognized and their role is to be used for the sake of establishing of civil institutions; equal opportunities for all and the principle of the right man for the right job will be applied.

Out of our conviction of the vitality of building a well-rounded Palestinian individual, the C&R attaches great importance to education which will keep abreast of modern innovations. Islam of course will be the core of the Palestinian education philosophy – reforms are to be introduced to the current education system, the C&R details its policy in this regard in 17 items proposed to rehabilitate the system. C&R lists five measures to raise the efficiency of the clergy and regulate and care for mosques and emphasize their educational role.

The Palestinian family, as the nucleus of the Palestinian society, figures high in the C&R platform; 16 items detail the proposed suggestions that will strengthen the family and its role. Palestinian family Laws are to be derived from and conform to the Shari’ah law as far as the society is concerned; reconciliation committees should be activated in order to discharge their role as trouble-shooters.

Culture and media play a vital role in shaping the mentality and thought of citizens, and building up of the nation’s personality. Freedom of thinking, expression and fairness and safeguarding the youth from external corruptible influence are chief among the C&R concerns. Official media should work for enhancing the people’s steadfastness and resistance.

Women’s rights will be guaranteed so that they can contribute to the building of society, socially, economically and politically. Women’s organizations should be encouraged. The C&R enumerates the actions that they should take to raise the status of women. Youth care is among the aims to be achieved by the C&R – talents among the young are to be tapped and encouraged.

Public land should be taken care of so that they can be fully utilized to build villages and public housing to be distributed fairly and equally among those in need. Heath Care system is to be reformed and made available to all people, especially the needy. Health care centers will be built to serve all sections of the people wherever they live.

Public health and hygiene will also be taken care of. The environment is to be protected. Agriculture and animal husbandry will be encouraged. Small farms will get credits in order to effectively make use of the land. The use of insecticides should be regulated for full benefits.

On the economic level, the economy and monetary system should be independent from the Zionist entity and its economic and monetary system. The C&R will mint Palestinian currency; self-sufficiency is an ultimate objective to be worked for through a number of measures. International economic agreements will be reconsidered and revised so as to serve the interests of the Palestinian people, chief among them:

*The Free Trade Agreement with the USA.

*Partnership Agreement with the EU.

*The Economic Agreement with Egypt and Jordan.

The Economic and trade relations with the Arab and Islamic world should be developed. The Palestinian economy should be helped to disengage itself from the dependency on Israeli economy. Income tax laws must be reconsidered and reformed. Labor and unions and occupational societies will be encouraged and developed; minimum wage limit should be established to guarantee a decent standard of living for all, wages and salaries should be linked to the index.

Roads must be updated and modernized; movement among cities and villages should be emphasized and smooth; opening of free crossings between Palestinian territory and Jordan and Egypt. Any foreign interference is rejected; the port and the airport are to be reopened.

CONCLUSION: Al-Aksa Intifada has created new realities on the ground, which made history of the OSLO program. The different parties, including the Zionist occupation are for the “burying of Oslo”.

ISLAM IS THE SOLUTION AND IS OUR PATH TO CHANGES AND REFORM. OUR PLATFORM IS OUR WAY TO ENHANCE THE BUILDING OF THE SOCIETY WHICH WAS DESTROYED BY THE OCCUPATION. THE SAFEGUARDING OF RESISTANCE AND ITS AGENDA IS THE WAY TO STRENGTHEN NATIONAL AND ISLAMIC UNITY – ON THE WAY TO COMPREHENSIVE NATIONAL LIBERATION. THIS IS THE PLATFORM OF THE WHOLE PEOPLE AND HOMELAND.